The Dangers of Driver Fatigue in California 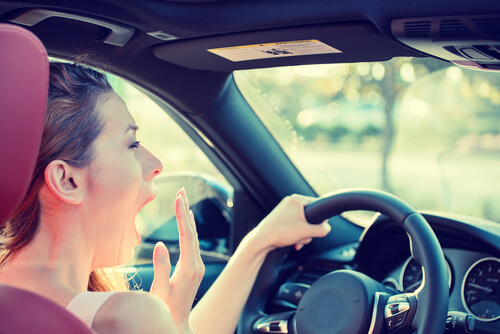 Being fatigued and drowsy will affect someone’s ability to drive safely, even if they do not fall asleep at the wheel. Some of the most common reasons for driving drowsy or driver fatigue include working long hours, shift work (working in the late evening and early morning hours and sleeping during the day), taking certain medications, being under the influence of alcohol or drugs, or like 70 million Americans, have an underlying sleep disorder.

What Fatigue Does to the Body

While fatigue clearly makes someone sleepy, it presents many other consequences, especially when operating a motor vehicle. For example, fatigue will slow reactions times. If you are driving a vehicle while fatigued and you have to swerve to avoid a deer in the road, or brake suddenly due to the vehicle in front of you stopping suddenly, you will have a slower reaction time and a great propensity to cause an accident. Additionally, fatigue dramatically affects your ability to make good decisions.

To understand the gravity of how often driver fatigue impacts car accidents, injuries, and deaths, it is important to highlight some driver fatigue statistics in the United States:

Some drivers may also experience something known as micro-sleep. These are involuntary, short periods of inattention that last 4 or 5 seconds. However, while traveling at highway speeds, this means a vehicle could travel up to the length of a football field while a driver is having an episode of micro-sleep.

Driver fatigue is one of the leading reasons that truck accidents occur on the roadways. Almost 13 percent of all trucking accidents are due to driver error, which oftentimes is a result of driver fatigue. Truck drivers are encouraged to work long hours and may feel pressure to forego sleep. With such a large vehicle on the roadway, driver fatigue of a truck driver could easily result in an accident.

The necessity for high-volume shipments creates a sense of urgency among truck drivers, which may cause them to skip their required and necessary rest breaks, resulting in driver fatigue. One-fourth of all truck drivers have admitted to falling asleep at the wheel at least once in the last month. While any driver can suffer from fatigue and drowsiness, when truck drivers fall asleep at the wheel or drive with fatigue, one mistake can be fatal.

Fatigue and drowsiness can overtake a person quickly, and it is important to act right away. In order to prevent falling asleep at the wheel, or drowsy driving, learn the warning signs so that you can pull over your vehicle and get some rest, or not drive in the first place.

It is important to note that opening the windows, drinking coffee, drinking energy drinks with caffeine, or turning up the radio will not keep you alert and cure driver fatigue. Once you have driver fatigue, you should pull over and stop driving, or allow someone else to take the wheel.

The best ways to prevent driver fatigue are listed below. Knowing how to prevent drowsy driving can save your life and the lives of those around you.

If you were involved in a car accident that involved a fatigued driver, you may have a right to receive compensation for your injuries. Driving with fatigue is negligent and can cause serious accidents that result in severe injuries. Contact the experienced car accident attorneys at Silverthorne Attorneys today at (949) 234-6034 or online for a complimentary consultation of your case.